Granite is a very common type of felsic intrusive igneous rock that is characterized by its granular and phaneritic texture. Granite can be defined as an igneous rock that comprises of at least 20 percent quartz and up to 65 percent feldspar by volume. 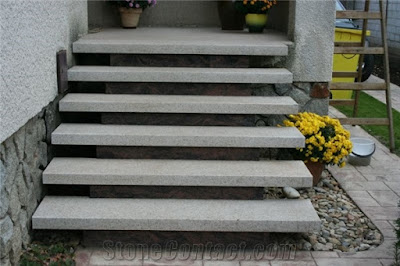 The word 'granite' came from the Latin word 'granum'. Granite is usually massive, tough and hard. For these qualities, granite has gained widespread use over the time. For use in home, office etc. in India,  granite is used as a construction stone. It is noteworthy that granite has poor permeability but on the other hand strong secondary permeability.

In India, there are varieties of granite. The granites in India can be found in over 200 shades. The granite reserves of India, as of the year 2005, were more than 37000 million cubic meters and were ranked fifth in the export of processed product. In India, resources of granite are found in Madhya Pradesh, Tamil Nadu, Orissa, Jharkhand, Karnataka, Chhattisgarh, Andhra Pradesh and Rajasthan.

A theory says that granite in place due to extreme metasomatism by fluids that bring in elements, like potassium, and by removing other elements, like calcium, in order to transform the metamorphic rock into granite. This theory is called granitization. This was believed to occur across a migrating front.

The formation of granite by metamorphic heat is hard but is seen to occur in certain granulite and amphibolite terrains. In the original place, granitization or melting by metamorphic heat is difficult to identify except where melanosome and leucosome textures are present in migmatites. As soon as a metamorphic rock is melted, it becomes magma, therefore, these rocks are considered as a transition between the two, but technically are not granites as they do not intrude into the other rocks. In all the cases, in order to melt solid rocks, a high temperature is required along with water & other volatiles, which act as a catalyst by bringing down the solidus temperature of the rock.

Granite & related marble industries are one of the oldest industries in the world and date back to Ancient Egypt. Over the time, the uses of granite have increased. Granite is used for use in home, office etc. in India and also in sculpting and memorials. Following are some of the important uses of granite.

Granite is seen to be used extensively as flooring tiles in public & commercial buildings. Aberdeen, a place in Scotland, is constructed primarily from local granite. Aberdeen is also known as The Granite City. Polished granite is used for kitchen counterparts because of its high durability and aesthetic properties.

Engineers have been using polished granite since a long time in order to establish a plane of reference. Due to granite's rigidity, outstanding vibration characteristics & high dimensional stability, granite tables are used popularly as a base for optical instruments.


Granite is used by climbers due to its steepness, crack systems, soundness and friction. Interestingly,
granite rock climbing is so famous that many of the artificial rock climbing walls that are found in theme parks and gyms are made in such a way that they feel & look like granite.